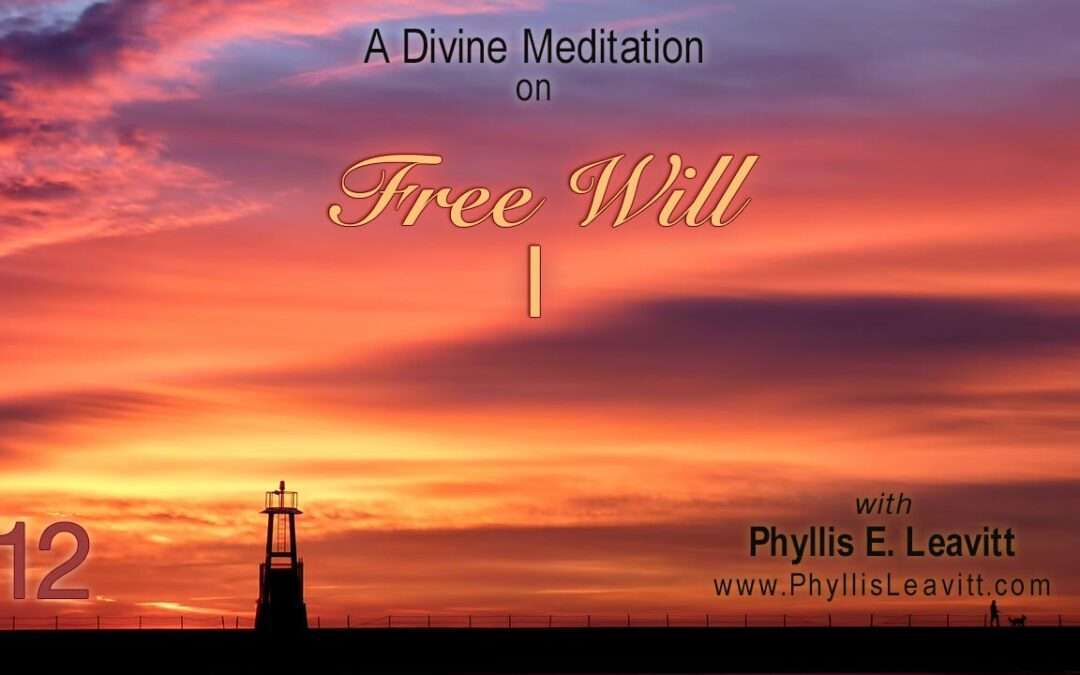 A Divine Meditation 12: Free Will: Part One

I understand from all the writing I have done with Divine Voice over many years that we all came here in human form ultimately to evolve from ego consciousness to Soul consciousness, from the divisiveness of separation to the union of Divine Love. The path of Return to Oneness is based in a practice of releasing our consciousness from the grip of ego to allow Soul to manifest through us for the highest good and the speediest return of all. We don’t just individually bliss out to Nirvana—we stay right here on the Earth plane and participate as Souls in the return of all beings. This is no small challenge in the density of ego consciousness playing out on the Earth plane today. How do I be Soul in the age of Trump?

Divine Voice:
The urgency you now feel to evolve consciousness arises because you are not sustainable as a species if you do not or are not able or willing to make the evolutionary leap from ego consciousness to Soul consciousness, to a consciousness of separation and division to a consciousness of reunion with your true Divine Nature. Ego consciousness has taken you as far as it can and you know this because the creative potential in ego has now in the present age fused with your destructive potential. In service of your quest for what you consider more and better, you have created weapons of such mass destruction that you stand on the brink of your own extinction. And– just as almost all the life forms on the planet Earth are interdependent with you and may cease to be in the forms you know them without the evolution of human consciousness, you too, are dependent or exist within the evolution of a larger consciousness that is NOT dependent on you but holds you in its evolutionary embrace and on which you fully and completely depend for your very existence. The evolution of consciousness is on a scale that the human race cannot yet conceive of. You are not alone in the universe. You are held up in your very fragile but exquisitely beautiful human existence by Consciousness itself, by a Plan. You are now learning both individually and as a race of beings to understand the exquisite fragility of your own mortality within the infinite continuity of life. And just as this perspective of your own mortality gives you personally a sense of what you call higher meaning and purpose, as a race you are now seeking to open to the higher meaning and purpose of your collective existence in the context of a vastly expanded vision of the continuity of life itself that includes the birth and death of your planet and the larger cosmos in which it exists.

Ego, lawfully, is doing everything in its power to prevent this expansion and evolution of consciousness, not because it is bad or wrong, but because that is what ego consciousness was designed to do. It was designed to keep you in the Sleep of Forgetting who you really are and how human life was intended, ultimately, to evolve. As a race, you stand now at the tipping point of your existence, where the intent is now to Wake Up collectively from the Sleep of Forgetting and return to your true Soul nature. That is the Plan. That is the larger consciousness in which you swim, and it is even larger than that.

Phyllis:
Earlier You said, “…if you are not able or willing to make this evolutionary leap…” What does that really mean? If as You say there is a Divine Plan, is it not then already known how it will all turn out for the human race? Do we actually have a choice in whether we survive or not, or is it foretold? This brings up the age-old question of free will.