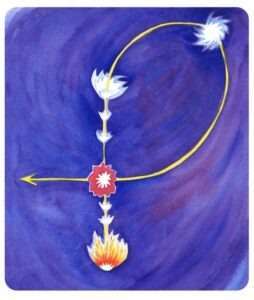 This logo is an image I painted in 1995 after seeing this symbol in a meditation. It is called The Breath of the Cross. It depicts a way of transforming ego consciousness to soul consciousness through a visualization of the chakras, working with their energies, and breath work.

Very simply, the Fire symbol at the bottom represents the First Chakra. Energy moves upward through the Second Chakra, the Solar Plexus Chakra, and the Heart Chakra, symbolized by the pink flower with a white center star, into the Throat Chakra, the Third Eye and finally the Crown Chakra at the top of the head. From there energy moves in an arc back down toward the heart Chakra, intersecting with the Divine along the way, represented by the white star shape, and entering the Heart Chakra as Divine Love.

The process of transformation of ego energy to soul consciousness or Return to Oneness, represented by the Breath of the Cross symbol, is called The Way of Supreme Surrender and it will be described in detail in The Road Home Series, starting with Book I, The Road Home: A Light In The Darkness, coming out soon.